It doesn’t matter how many times I’ve gone to Disney World, I still find something new and exciting to enjoy every time. If you’re looking for the hidden gems of Disney, those little-known secrets that make the park extra special, I’ve got the perfect list for you.

Head over to the candy shop on Main Street in the Magic Kingdom. There’s an old phone on the wall inside. Pick it up and you can list to an old-time conversation between and mother and a daughter. Very cute.

Disney’s Electrical Water Pageant is a magical display of lights that travels around Seven Seas Lagoon and Bay Lake. This is another show that would be great to watch from the beach of the Polynesian Resort.

The nightly display usually follows the schedule below.

Maelstrom in Norway at Epcot

The Maelstrom ride in the Norway Pavilion at Epcot is one of the most overlooked rides at Walk Disney World. I think it’s one of the best. The waiting queue and ride are inside so it’s a great place to escape very hot or cold weather. It’s located all the way in the back of the Norway section, so if you think you’ve passed it, just keep walking. The ride itself is moderately exciting, at some points even going backwards. The line is rarely longer than 30 minutes and it’s one of the best places to get off your feel while traveling Epcot.

Remember when phone booths we everywhere? Now, with the popularity of cell phones, we enjoy them with a bit of nostalgia. There are three phone booths outside the United Kingdom and one in Canada in the World Showcase. You can call them and talk to guests inside the park! It’s great for those times I’m really having Disney withdrawals. Remember, guests pose with photos and sometimes the line is busy. If you get a busy tone or a fax tone, just hang up and try again. If you're there and hear them ringing, pick it up!

Miyuki is a wonderfully talented candy artist. You can find her in the Japan pavilion of Epcot. Once upon a time, she could give her beautiful candy creations to children in the audience, but the health department squashed that. Now, if you get there early enough, she’ll take requests on what to sculpt, then you can take photos of it after her show. Her show is free, but get to her booth early for a good spot in the crowd.

Not to be outdone by the candy sculpting in Japan, China offers a daily acrobatics show performed by the Jeweled Dragon Acrobats. Consisting of 8 people under the age of 21, the troupe wows crowds with extraordinary flexibility and agility. Get there early to get a good spot.

The “backdoor” to Epcot leading to the Kitchen Sink 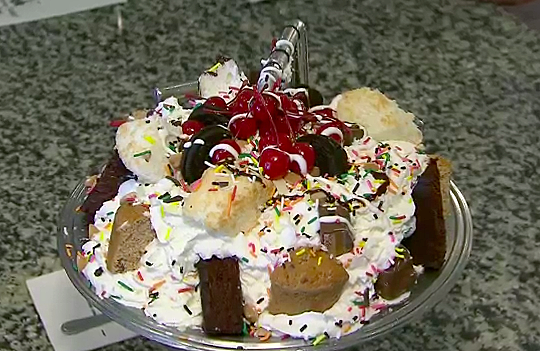 Right next to the Paris pavilion is a walkway that will lead you in and out of Epcot. Take this for a 3 minute walk to Disney’s Beach Club Resort where you can dine at “Beaches and Cream” and divulge in the best ice cream sundae of all time, the Kitchen Sink. This photos in no way does justice to the size of this sundae. It’s HUGE!

Up Next: A Constantly Updated List of Disney World and Disneyland Sweepstakes

Find DiVine in the Animal Kingdom

DiVine is a street performer found only in Disney’s Animal Kingdom. In un-magical terms, she’s a stilt walker covered in vines and incredible face paint who blends right in with the landscape. If you want to find her, grab a schedule when you walk into the park. Her performance times should be listed. Or you can wait for a crowd to gather around her to watch her move and sway in the most awe-inspiring ways. You can usually find her near  Tusker House restaurant. She usually hides in the vegetation on the left near the character spot for Baloo the bear.

Have you met Herb and Flora yet? They’re two talking bushes on the way to Camp Minnie Mickey. They interact with guests and make very funny comments as they watch people pass by.

Fireworks at the Polynesian

Did you know you can go to any of the Disney resorts as a guest of Disney World? Yep! most of the resorts have wonderful restaurants and shops inside that are well worth the visit. You can use Disney buses or the monorail to get to them, or you can drive there and tell the person at the gate you’re there for dinner. My favorite resort is the Polynesian. Although I’ve never stayed there (a bit too pricey for my budget), I’ve eaten dinner there several times. If you time your day just right, you can even catch the fireworks from the Magic Kingdom from a very comfortable hammock on the beach of the Polynesian Resort. In my opinion, it’s MUCH better than trying to find the perfect location to see them from inside the parks.